It's a Black Market THC Epidemic. Not a Vaping Epidemic

The recent hysteria and panic in the U.S. around "vape related illnesses" has finally made it to the world's stage with news media outlets nationwide prematurely warning the masses about the potential dangers of vaping. But sadly, the media doesn't tell the whole story. What is the truth? Vaping standard nicotine eliquids has not killed anyone. In fact, it has helped millions of people quit smoking and those who have made the switch would argue that vaping nicotine eliquid actually saved their lives.

Unfortunately "trusted" public health organizations like the CDC and the FDA failed to reveal the full truth which allowed mass media and corrupt politicians time to implicate vaping (the delivery system), rather than the illegal substances that were being consumed using the delivery system. If you can understand the difference between a delivery system (ie. a needle or inhaler) and the substance being consumed using that delivery system (ie. heroin or steroids), you should understand that banning legal flavored nicotine eliquids does absolutely nothing to address the epidemic of recent illnesses linked to black-market THC products.

Nearly two weeks later, after New York and Michigan governors had already exercised their executive action power to ban flavored vaping products, the CDC finally released a statement saying that "most patients have reported a history of using e-cigarette products containing THC." Still to this date, the CDC and the FDA remain slow to update the public as state health organizations report that the majority of patients admitted to using black market THC products. And those who did not admit to using the black market products outright were either underaged and/or resided in states where cannabis is not legal.

Our Government Has an Agenda 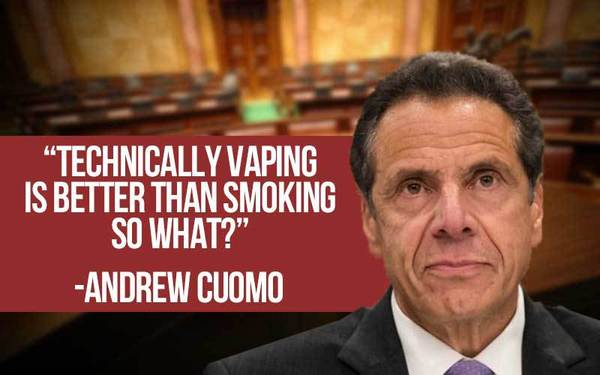 Politicians have ignored sound science to push their agendas and it is absolutely sickening. Isn't it curious that the U.S. government is demonizing vaping while the U.K. embraces vaping with open arms? You might ask yourself how Big Tobacco and Big Pharma might benefit from controlling a technology that is getting millions of people off cigarettes.  Research done by the Royal College of Physicians and Public Health England has proven vaping nicotine eliquid to be at least 95% less harmful than smoking. In light of all the fake news in the U.S., the UK (largest public health sector) continues to encourage vaping as a much safer alternative to smoking. Link to RCP Study

Regardless of the science, politicians and anti-vaping advocates continue to push their agenda to ban flavored vape products even though the illnesses were caused by an illicit black market product manufactured and sold by drug dealers. But why would our government lie to us? It's all about the money.

The Tobacco Master Settlement Agreement (MSA) is the largest settlement in American history between the Big Tobacco companies and 46 US states. After multiple lawsuits were filed against big tobacco companies by states government, the MSA was created to compensate the states for healthcare costs associated with treating smoking related diseases.

This agreement allowed the big tobacco companies to stay in business and be freed from class action lawsuits by promising annual payments to state governments in perpetuity to cover smoking related healthcare costs and fund anti-smoking advocacy groups (minimum of $206 billion over the first 25 years).

Because the states wanted all of the funds up front instead of waiting for annual payments, states sold bonds to Wallstreet based on future projected tobacco revenue. With the explosive growth of the vapor market, smoking rates are falling and states are now in danger of defaulting on their bond payments if they don't find a solution fast. With New York and California having the largest population of people, those states were affected the most and there is no question why New York was the first to implement the flavor ban.

Not Addressing the Real Issue

The narrative has been purposefully muddied and the media has created a public health crisis around vaping nicotine while reports clearly point to vaping black market THC products. Ask yourself, how does banning legal nicotine eliquids prevent illicit THC street drugs from getting into the hands of our children?  It simply doesn't.

Not properly investigating and reporting on the actual substances causing these recent deaths is incredibly irresponsible and detrimental to public health. Prohibition of flavored vapor products will make it illegal for adults to access the flavors that helped them quit the deadly habit of smoking. It does nothing to prevent people from consuming illicit street drugs. A vape ban will only strengthen the black market and increase the number of dangerous unregulated products in the market. How is that doing anything positive for public health?

The Truth Will Set You Free

You've heard the saying and it is true. The truth will set you free. But it is tough when the mass media and all of the "trusted health agencies" are lying to you. This is not a conspiracy. This is not propaganda. Vaping nicotine eliquids has not killed anyone. Vaping black market drugs killed these people.

But how do you decipher the lies from the truth? Doesn't vaping give you popcorn lung? Isn't it a gateway to smoking traditional cigarettes? The answer is NO. Check out this article published by the Public Health England debunking many of the myths our mainstream media and politicians are preaching as the truth: