Over-the-road driver Tanner Peavler used to smoke three packs a day, and he wasn't alone. More than half of truck drivers (51%) smoke cigarettes compared to 19% of the general adult population, according to the Centers for Disease Control, and the habit contributes to hypertension, stroke, diabetes and cancer.

The 34-year-old trucker began smoking when he was only 18 years old, and three years ago he noticed he had trouble breathing. Climbing in and out of his truck became harder. Doctors told him to stop smoking. He wanted to quit but he couldn't.

Not only was his health failing, but he was becoming a social outcast in a nation where smoking was steadily dropping. "You know what it's like; you've been around people who smoke,” he explained. “They come in from outside and it's like, ‘Wow, I've gotta get away from this person. They smell so bad.’ I just didn't want to be that guy anymore."

Desperate to quit, Peavler decided to try a vaporizer, a tobacco-less, electronic cigarette that emits only water vapor. Touted as safer than cigarettes, vaping also allowed him to 'smoke' in many facilities that bar tobacco smoking because of an open flame. "Some of them [loading docks and warehouses] still consider it smoking even though it's technically not. Others are like, 'it's not combustible, so go ahead.'"

Electronic cigarettes are battery-powered devices with cartridges filled with a liquid, commonly called 'e-juice,' that usually contains nicotine and flavorings. A heating device converts the liquid into a vapor, which the person inhales.

Since switching over to e-cigs three years ago, Peavler said he feels much better, breathes easier, and while some doctors are still concerned about chemicals, including nicotine, in e-juices others applaud his efforts. "They think, 'Oh, it's still nicotine.' They don't want you to do it. Out of most of the doctors I have talked to, there's been one or two that said, 'Hey, yeah, keep it up. Your lungs look good. Your sinuses sound clear. So do what you're doing.'"

Peavler, who works for Western Flyer Express in Oklahoma City, may be on to something. A recent article in Tobacco Control, a journal that accepts no papers from any researcher affiliated with or receives funding from tobacco interests, says that cigarette smokers who switch to e-cigs will live, on average, 5 to 10 years longer than those who continue to smoke cigarettes. "The key thing to remember is they need to switch completely," said lead author David Levy, PhD, professor of oncology at Georgetown Lombardi Cancer Center in Washington, DC.

The study noted: "Compared with the status quo, replacement of cigarette by e-cigarette use over a 10-year period yields 6.6 million fewer premature deaths with 86.7 million fewer life years lost in the Optimistic Scenario. Under the Pessimistic Scenario, 1.6 million premature deaths are averted with 20.8 million fewer life years lost." (The study performed an 'optimistic' and 'pessimistic' view of outcomes depending upon whether future studies show that e-cigs are more harmful than science now indicates.) 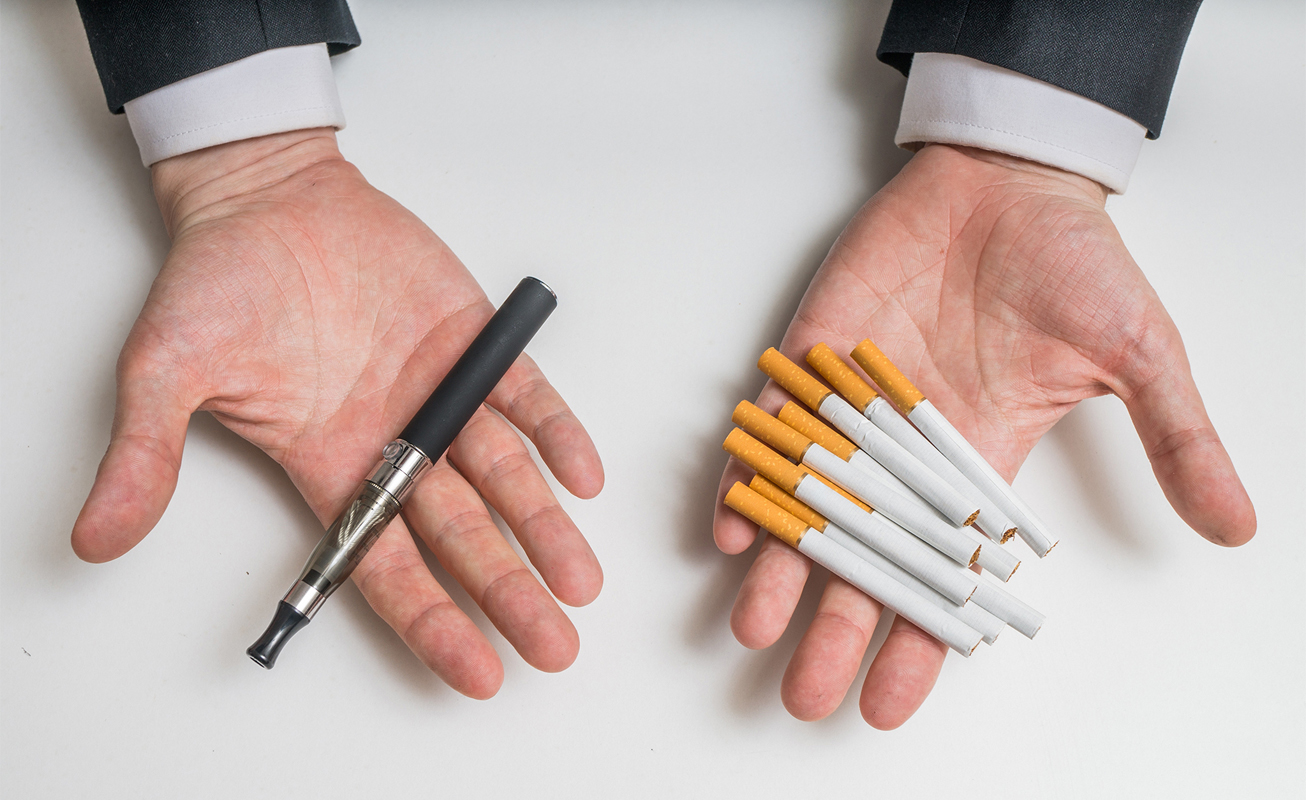 "[Switching] doesn’t have to be right away, (Peavler was a dual e-cig/tobacco user for a while until he switched completely to e-cigs) but if you smoke any cigarettes at all you still you have double the heart risk, which is the big problem for people under age 65. It’s important to switch completely to e-cigarettes," said Levy, who noted that remaining tobacco smokers may smoke more zealously. "The price of cigarettes has gone up, so many people smoke the cigarette down closer to the butt. They also inhale more deeply. People who are left smoking may be more highly addicted. The evidence shows that over time the mortality from cigarettes is going up."

To save money and control what he vaporizes Peavler mixes his own e-juice. "I found a simple sugar cookie [flavored] recipe that is good, so I just keep making that. Basically, it's nicotine flavoring and vegetable glycerin. It's three or four different things. It's actually not very hard to do for what you get."

No one suggests that e-cigs are totally without harm, however. E-cigs usually contain nicotine – which is addictive – and some researchers suggest it can prime the brain’s reward system, putting vapers, especially teens, at risk for addiction to other drugs, according to some studies. Other research suggests that, depending upon the e-juice and the vaporizer itself, the vapor may contain toxic or carcinogenic chemicals.

To those truckers who smoke, Levy offers: "Many smokers have tried to quit and want to quit and probably feel the effects of smoking in terms of shortness of breath and that kind of thing. For a lot of people e-cigarettes have worked, and if you can switch completely to e-cigarettes, you’re definitely much better off health-wise than if you keep on smoking cigarettes."

Peavler said it's sometimes difficult to convince his fellow drivers that vaping is better than cigarettes. "I've got a lot of friends who smoke, and I've tried to tell them about vaping, but they're just set in their ways. I tell them that it's only $100 lost [if it doesn't work] so give it a try. That's all I can do."