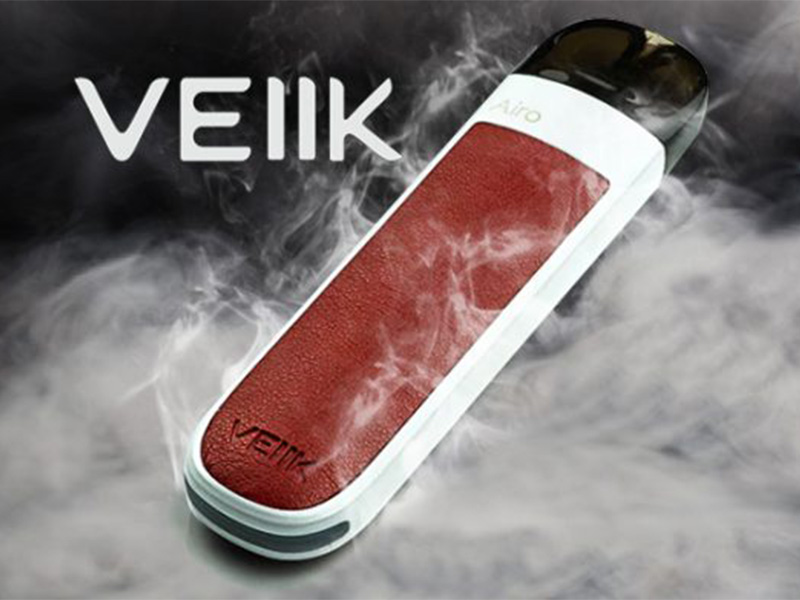 Still looking for a pod system that suits your needs? It’s hard to choose with so many out there, and even harder to weed out the bad devices from the good ones, unless you spend a ton of time reading reviews before purchasing. That’s what we’re here for! We like to help you make the best buying decisions you can on your equipment because we’re passionate about vaping just like you are. This month, I was sent a new pod-based system for the purpose of this review: the VEIIK Airo Pod System. 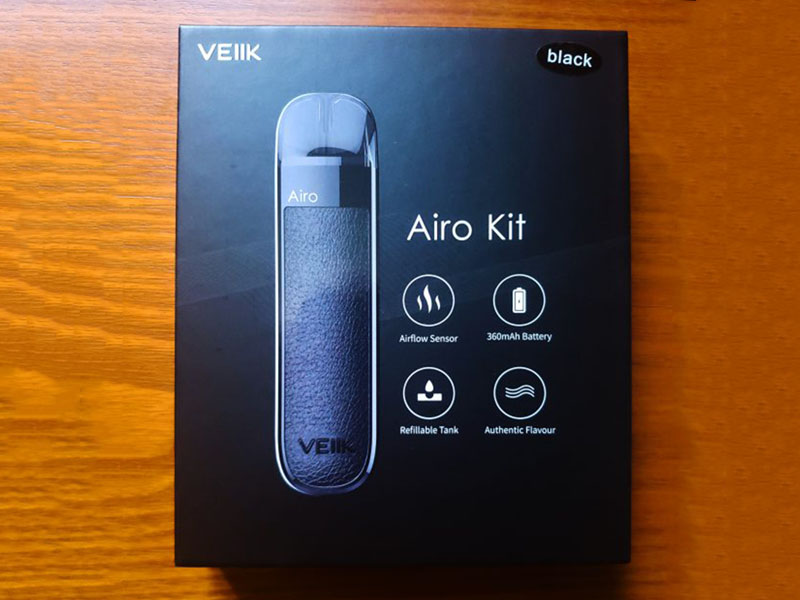 I was pleased to see that I received the black version of this kit. The VEIIK Airo Pod System is also available in brown, red, blue, and rainbow/black. The design of the Airo Pod is sleek and sophisticated. Immediately, you’ll notice the PU leather panels on the front and back. I appreciate that it’s vegan leather, and it’s attached very nicely. It makes it awfully comfortable when you’re holding the device. The rest of the device is a matching zinc alloy.

This looks like a more expensive system at first glance, which is a nice touch. It’s worth noting that the pods on each design are all the same color: a translucent black. 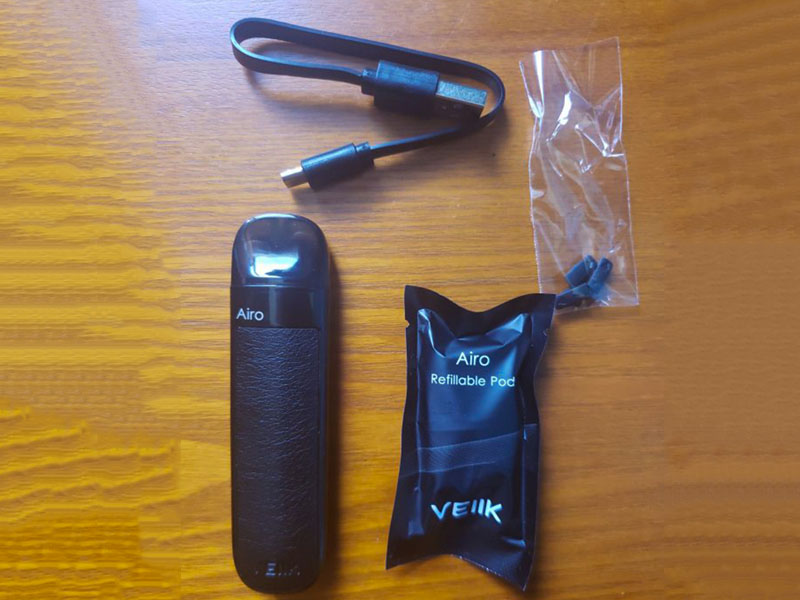 What You Get Inside the Kit

Need to Know Info: The Build and Details

As mentioned above, the chassis of this pod system is a lightweight and durable zinc alloy. The pods themselves are made with PCTG plastic. The VEIIK Airo Pod System uses a 360mAh internal battery which you can charge via the USB port on the side of the mod. It is powered by V1 Micro Chip. The only two components of this kit are the refillable pods and the mod/battery.

On the bottom end of the device, you’ll see what appears to be a light panel. Once you plug the VEIIK Airo Pod System in to charge, there will be a flashing white light.This has 1A charging, so you should be able to get a full charge after 45 minutes to 1 hour.

The mini pod have a 2ml juice capacity. The resistance of the coil is 1.2-ohms. Although these are a black color, it’s pretty easy to see your liquid level. However, I will note that in dark rooms or low-level light it’s a bit more challenging than it would be if these were a lighter color or completely clear.

If you’re accustomed with any pod system, you’ll figure this out quickly on your own. The Airo pods have a filling system on the side (rather than the bottom). To fill, simply remove the silicone plug, fill carefully with e-liquid, and pop the plug back in place. Keep in mind that these plugs come out entirely. Since they’re small and easy to lose, there are some spares. But still, remain careful when pulling it out and putting it back in. After you’ve filled the pod, let it sit for at least three minutes to ensure proper saturation of the wicking. I would further recommend five to ten, to make sure you don’t burn the cotton and ruin the pod.

The VEIIK Airo Pod System will keep you informed of your battery level, thanks the LED light on the bottom. When you take a hit, you’ll see the device light up. If the light is white, you have 70-100% charge. Blue, then your at 30-70%. And finally, it will switch to red when you’re at 10-30%. When the battery has run out, the light will flash red ten times to let you know you need to charge.

It seems I never really know what to expect with these pod systems. Some of them surprise me with their performance, while others quickly let me down. But with the looks of this system, I was really hoping for the first reaction. I filled up my pod with Superb Salt’s Nectarberry (read the review of their freebase Nectarberry E-Liquid).

This is a draw-activated system like a lot of pod mods out there. At first, I wasn’t getting anything. It took me a minute of adjustment to realize that I needed to take a stronger draw. The flavor I got from the first few hits was very good. I’ve tried some pod systems that really fail in the flavor department, so that made me happy. I also noticed that the vapor production was a bit more than expected. But, this is still a pod system, so clouds here aren’t the concern.

After I ran out of the salt liquid, I tried some 6mg liquid: Wild Berry Limeade from Doctor Big Vapes. The flavor was a bit less intense, but still quite good. Obviously, there was a significant difference in throat hit, but I just wanted to see that these pods could handle a traditional e-liquid. I found that they can. However, I do still recommend this more so for those higher-concentrated liquids, especially salt nicotine based.

How Does the VEIIK Airo Pod System Stack Up to the Competition?

I was very pleasantly surprised with this pod system. The pods give a nice, clean flavor. After about a week, I began to notice that it was tasting slightly burned, but that was a pretty good run, especially since I was vaping it all day, every day. The charge on the Airo was quite impressive. I got about eight hours out of it with moderate usage. The days that I vaped heavier, maybe about five-six hours, while a day or two I vaped less, I got close to two days of charge. So that should give you an idea of battery life.

The only comment that I have to give on this kit is the draw. I found that I was able to get a more flavorful draw when I covered the hole on the side, as suggested in the manual for a tighter MTL draw. That felt like an easier way to use this, in my opinion. When I used the device normally (without covering the airflow hole), I had to work a lot harder. Once you’re used to the draw on the device, it shouldn’t be much of an issue. Just something to keep in mind. Overall, the VEIIK Airo Pod System is a classy, affordable option for MTL vapers who desire a trustworthy, lightweight device with a longer-lasting charge.

Feeling confused? Don’t know what to buy? Read more of our hardware reviews.

Like what you just read? Consider clicking one of the affiliate links in this post or using the Vape Deals page on the site to make your next purchase. You get the chance to buy products (at a discount) from great companies, and we get a small commission when you use these links — which helps keep the lights on and pay for more great content. It’s a win-win!

A Basic Guide Of Pod Vapes